Most people probably don't give too much thought to our old friend, TCP. For the most part, it's just a transparent piece of infrastructure that sits between clients and servers, and we focus most of our time paying attention to the endpoints, and rightly so. Almost always it does the right thing, and we don't care. Life is good.

However, sometimes you do need to care. This is about one of those times.

This is what a typical HA deployment of Red Hat Enterprise Linux OpenStack Platform looks like, focusing specifically on the RabbitMQ service: 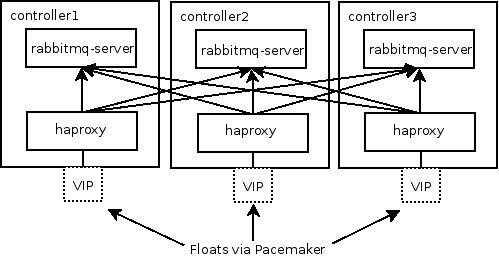 At this point, everything is happily chugging along. There's a bunch of clients (or in AMQP parlance, consumers and producers) connected through the VIP, through HAProxy, ultimately to RabbitMQ on the backend. What happens if the VIP fails over to another node?

For the clients, it's pretty straightforward. The client will try to write to the server on the existing connection. (This is either a "normal" write, or via a TCP keepalive probe, which is a related topic that I won't go over here. Just assume it's there). Since the packet gets routed to a new host (whichever one newly picked up the VIP), and the existing TCP session is not recognized by the new host, the client will receive a TCP RST. The client cleans up the connection and reconnects to the VIP to establish a valid session on the new server.

However, the server behavior is more interesting. Consider:

The source address for the connection from HAProxy back to the client is the VIP address. However the VIP address is no longer present on the host. This means that the network (IP) layer deems the packet unroutable, and informs the transport (TCP) layer. TCP, however, is a reliable transport. It knows how to handle transient errors and will retry. And so it does.

TCP generally holds on to hope for a long time. A ballpark estimate is somewhere on the order of tens of minutes (30 minutes is commonly referenced). During this time it will keep probing and trying to deliver the data.

See RFC1122, section 4.2.3.5 for details on the specification and the linux documentation for the related tunables in the kernel.

It's important to note that HAProxy has no idea that any of this is happening. As far as its process is concerned, it called write() with the data and the kernel returned success.

Let's take a step back now and consider what impact this has to the users of messaging. RPC calls over AMQP are a common use case. What happens (simplified) is:

If the VIP has failed over, #2 can trigger the problematic behavior described above. RabbitMQ tries to write the RPC request to one of the workers that was connected through the VIP on the old host. This request gets stuck in TCP retries. The end result is that the client never gets its answer for the request and throws an error somewhere.

The problem is that the TCP retries behavior allows "dead" consumers to hang around in RabbitMQ's view. It has no idea that they're dead, so it will continue to send messages until the consumer disconnects—when the TCP retries gives up some tens of minutes later.

Since Linux 2.6.37, TCP sockets have an option called TCP_USER_TIMEOUT. Here's the original commit message, since it describes it better than I could:

This is exactly what we want. If HAProxy writes something back to the client and it gets stuck retrying, we want the kernel to timeout the connection and notify HAProxy as soon as possible.

I talked to Willy Tarreau over at HAProxy about this behavior, and he came up with this patch which adds a new tcp-ut option, allowing the user to configure the TCP_USER_TIMEOUT value per listening socket. This is available in the 1.6 development branch of HAProxy, and is currently being backported to Fedora and RHEL OpenStack Platform.

I told you a little white lie before. Although Linux gained TCP_USER_TIMEOUT in 2.6.37, it was broken for some cases until 3.18. Importantly, one of those cases is the case I've discussed here. It doesn't handle the situation where the TCP layer has put packets into the output queue, but the packets weren't transmitted. That's the case when IP can't route it. So you'll need either a kernel >= 3.18, or one which has this patch backported and applied:

I've proposed this for RHEL 7.

The (Hopefully Very Near) Future

Most of this behavior can be detected and avoided by using application layer AMQP heartbeats. However at this time the feature is not available in oslo.messaging, although this review has been close for a while now. Even with heartbeats, having TCP timeouts as another knob to tweak is a good thing, and it has more general applicability. I've had success using the timeouts to better detect inter-cluster failures of RabbitMQ nodes as well, but that will be a future post.